(Parts one and two)

After saying farewell to Cobh and getting into our only “fight” (which was really just me yelling things because I hit a wrong button on the GPS), ma and I started heading west. We stopped at a town called Macroom for lunch, finding a booth at a darkened pub. That was where we were sitting when the news broke of Margaret Thatcher’s death. I know this was news everywhere, but it was especially huge in Ireland for obvious reasons. Over the next few days and nights whenever we’d catch some TV, we’d learn more about how the Irish felt about Margaret Thatcher. Spoiler alert: not positively!

After Macroom, we were back on the road to Killarney. Now, our travel bible during this trip was Rick Steves’ Ireland 2013. It was a great guide, but Rick strongly hates Killarney for being too “touristy.” He’s right, Killarney is a tourist town, but there’s something to be said for towns built with sidewalks and crosswalks and nice hotels and shops. We stayed at the Arbutus Hotel, which was lovely and had a nice pub downstairs. 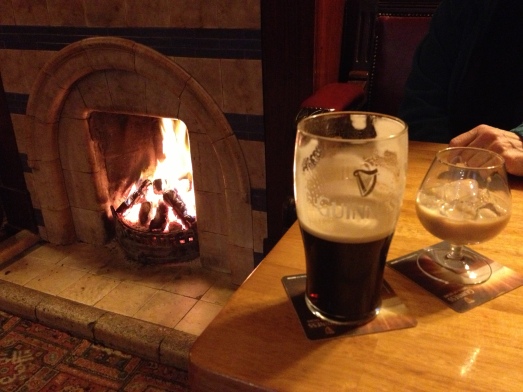 Anyway, we were really only using Killarney as our starting and ending point for the Ring of Kerry coach tour. I’m glad I chose to book us a coach tour rather than try to drive it myself, because we would not have known all the great places to stop, and I wouldn’t be able to enjoy the views while driving. I would be too busy having a heart attack.

Actually, this was a pretty great road compared to some – two lanes and everything!

The Ring of Kerry tour took all day and was well worth the 20-ish Euros we paid. Our guide was charming and knowledgeable and said things like “there’s a castle well-clad in ivy” like it was not a very amazing thing.

One of the first stops was at a bog museum and featured live music and dancing. This would not be our last encounter with bog turf.

The Ring of Kerry tour makes a loop around County Kerry (that much was probably obvious), stopping at ridiculously scenic points along the way. The pictures can’t really do it justice, especially since it was a bit foggy, but trust me when I say it was breathtaking. 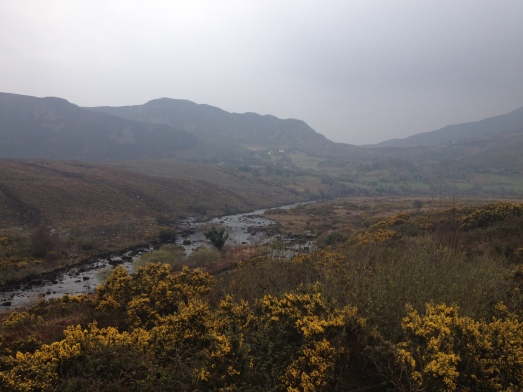 We were in Kerry during lambing season, so we saw literally thousands of lambs (and I got pictures of none of them). They were cute, but ma and I were seated in front of a woman with a strong New York accent who wouldn’t stop talking about the cute lambs unless it was to berate her husband. I named her Debbie. At one point we were able to hold a lamb; ma and I chose not to, but Debbie did and continually said it was “the best paaaht” of her whole trip. Until, that is, a few hours later, when she realized she smelled like a farm animal.

I’m sorry for laughing at this, Debbie. And thank you for making me grateful I chose to rent a car and not have to put up with other people for our entire trip.

Anyway, the coast was just lovely:

But for us, “the best paaaaht” was Torc Waterfall:

You could tell me that the Garden of Eden is hidden somewhere in this national park in Ireland and I would believe you. Especially since we also learned that Michael Fassbender grew up near here. Sounds like paradise to me.

Next up: my life reaches its pinnacle at the Cliffs of Insanity