I am a genealogy geek. I even did the Ancestry.com DNA test a few months ago, which essentially means I paid some money to spit into a tube so a computer could tell me “You are a white lady.” 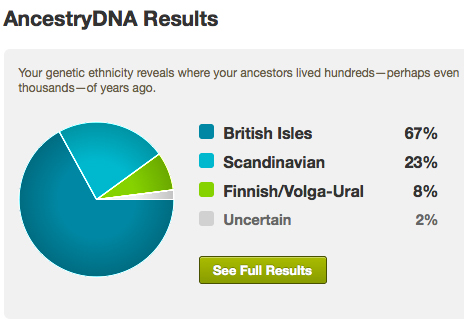 But 2% of me is inscrutable.

I am obviously Irish. I’m also a Minnesotan, which probably explains that Scandinavian and Finnish-Volga Ural business.  But frankly, one of my favorite parts of my background doesn’t really get a fair shake from this chart; although I think genetically attributed to “British Isles,” my maternal grandmother was all Acadian.

If you don’t know what that means, here is a totally accurate history lesson: In the late 1600s, a bunch of French people came to Eastern Canada, called it Acadia, and proceeded to marry each other and the occasional Mi’kmaq for three hundred years. In the late 17oos, some of them were displaced to Louisiana, where “Acadians” became “Cajuns” and started experimenting with spicy foods. But MY people stayed the hell put, making more and more French-speaking Catholics and naming them all Joseph, Pierre, Marguerite or Marie.  Eventually some of the Pierres and Maries decided it was time to spread the genes apart and migrated to exotic locations like Massachusetts, where they married Irish Catholics with names like Patrick, Joseph, Brigid, and Mary. They made many children, mostly named Joseph and Mary. From there sprang my mother, who went totally off course and married a Lutheran (descended from people named Ole, Thea, and Anna Maria), and created the genetic mutt you have before you now. And one of my names is Mary.

So anyway, I basically knew this much due to a family book tracing my grandmother’s family history. But what I didn’t know is that I am not the only Acadian with an obsessive interest in genealogy. In fact, I think we all might have that in common. There are tons of websites (and even books) about this section of people and their progeny. My theory is that at some point, someone looked at all their neighbors in Prince Edward Island and said, “Why do we all have the same face?” Or perhaps they started to wonder just how far off the island they’d have to travel to find a non-cousin to marry. The Irish faced a similar dilemma, I think.

The point is, this made a lot of research pretty easy for me, since hundreds of people have already done the hard work. And as far as I can tell, I am related to Canada. And some others displaced Acadians, which brings us to:

You’ve probably suspected for years now that I have the Fame and Fortune gene, but Valerie Cherish just proved it: Martin Aucoin is in their family trees, and he is also in mine. Although there’s room for error, it appears that Madge is my 10th cousin, and Ellen is actually my 7th through a different line.

If Ellen is reading this and would like to know about this other line, I’d be happy to come on your show and explain it. Madonna can come too, or we can just dance to Madonna songs. And scare Taylor Swift! I’m not related to Taylor Swift I just really like it when you scare her. We can also give money to people who deserve it because that is one of my favorite things and you seem to do that a lot, but it might have to be your money.

Get back to me.

Next time on Barely Related To Famous People: Cousin Biebs and His Twitter Army!