The challenge to do “something spooky” every day of October continues…

Co-“Halloween Nut” Sabrina and I hit Savers in preparation for the eighth annual (and our fourth) Zombie Pub Crawl on October 13th. We also did a little decor shopping, and I picked up some glass candle holders to hold my homemade bloody candles and complete this scene in my living room.

Quoth the raven: she stole this idea from Martha Stewart.

Day 6: “Beetlejuice” and photoshopping some freakiness

I popped in “Beetlejuice” while firing up photoshop on the computer  thanks to this idea from Young House Love. Basically all the frames in my apartment are now filled with portraits of my loved ones as skeletons, ghosts, or zombies. Surprise, loved ones!

Imagine getting an email that just says “look what I did to your face” and then you see this. That’s what it’s like being friends with me.

The creepy portrait takeover continued for another day while I started watching BBC’s 2005 series of “Bleak House.” That title, what I know about Dickens’ other work and the presence of Gillian Anderson convinced me it would fit the theme of Something Spooky, and I was right. The character names are pure Dickensian nonsense (“Prince Turveydrop,” you guys), people walk around wearing black veils and shooting each other, and someone spontaneously combusts.

Perhaps inspired by my marathon of “Bleak House,” I decided to make these things. 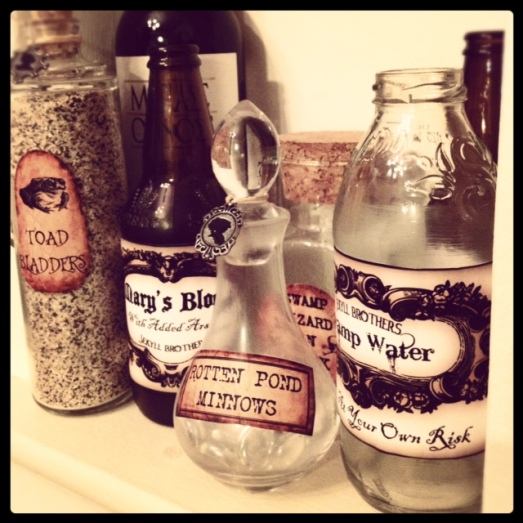 Looks like we need to restock on that Swamp Water.

And you can too! Here’s how:

Step one: Raid your recycling bin for glass bottles. Find one Snapple and two beer bottles.
Step two: Realize that’s not going to be enough. Consider drinking more beer (you are out of Snapple). Instead go to Goodwill and buy three interesting looking glass jars, one of which is filled with sand from Hawaii.
Step three: Do the dishes that have been sitting in your sink for a week.
Step four: In your now empty sink, soak the bottles (aside from the sand one) in hot water to remove leftover beer/tea/Goodwill dust, labels and price stickers.
Step five: Print spooky labels found primarily through Pinterest.
Step six: Cut out labels and adhere to bottles with Mod Podge. (Er, step 6.5: have Mod Podge.)
Step seven: Tie little charms to the tops of bottles for added effect (you found these in the clearance bin at Michaels when you bought the Mod Podge earlier).
Step eight: Group together, photograph, Instagram, admire, and acknowledge you are a woman of odd enthusiasms.

Day 9: Draw a spooky picture (while finishing up “Bleak House”)

I knew I wanted to do a spooky sketch, and since I’d been photoshopping skulls for two days, I decided to continue the theme.

When I draw, I get pretty focused on what I’m doing without actually realizing…what I’m doing. That is to say, I worked on this for about two hours before stepping back and going “Holy crap. I’ve been staring THIS in the face? Get it away from me.” So while it’s not perfect, I’m not touching it again.

It turns out covering my apartment with cobwebs was not enough. Making candles bleed was not enough. Decorating with books I had lying around the house (including, and I’m not kidding when I say I already had this on hand, a copy of the actual Rite of Exorcism) was not enough. But a picture drawn with pastels, the medium of softly-lit portraits of children and fluffy animals, was enough. I finally, legitimately gave myself the creeps. Not that I’m crying uncle; I just think I need to give skulls a rest.